The Northside Athletics Carnival will be taking place in week 7 on Tuesday the 30 August. The school is seeking 1-2 parents or ex-students who may be able to volunteer on the day to help officiate track and field events in conjunction with ACT Athletics Officials. Your help would be greatly appreciated.

If you are able to volunteer, please get in touch with our Sports Coordinator grace.hammond@sfx.act.edu.au

The girls were one of four teams in their pool coming up against UC Kaleen, Daramalan, and Melrose High School. The 7/8 team came out firing with some great plays defeating UC Kaleen 36 – 0. The girls managed the wet conditions and come up with some great attaching and defensive plays across the day. The girls came third overall just missing out on finals. Well done to all on a massive effort, it was a pleasure to take you out. A big thank you to Jye R and Jye S for helping coach the girls on the day. 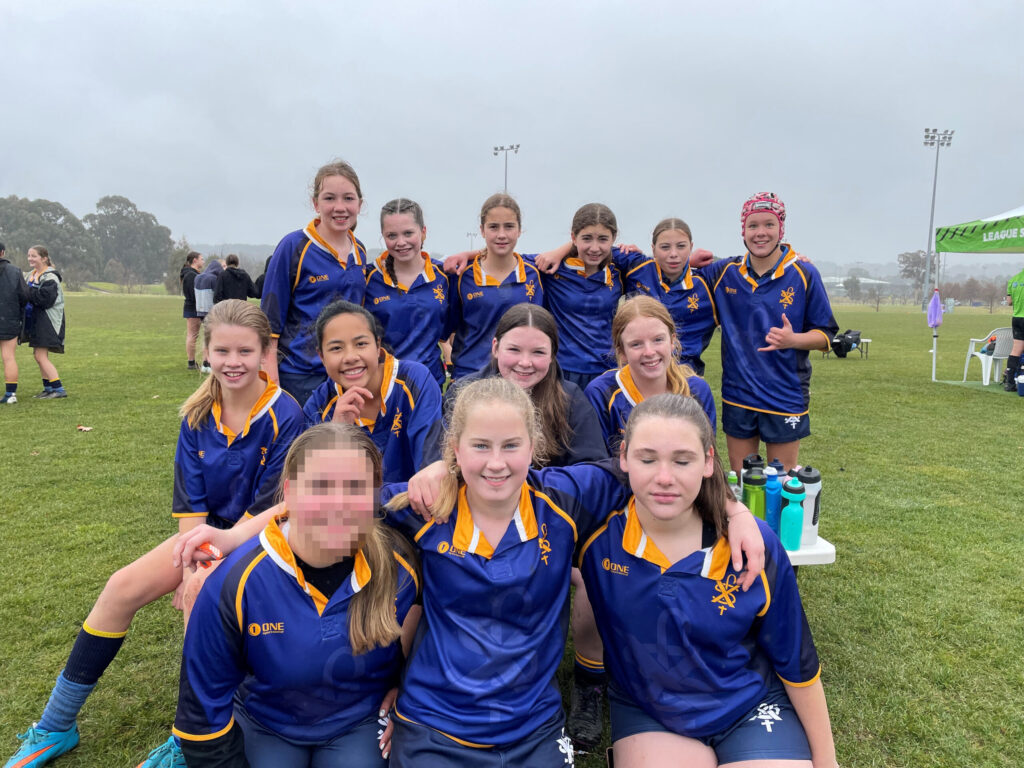 The girls were one of five teams in their pool coming up against Erindale, Daramalan, JPC and UC Kaleen. With a slow to the day the girls lost their first game to JPC. By the second game the girls started to work together more on field shifting the ball in attack and scoring some great tries against UC Kaleen winning 20 – 12. The third game saw us take on Daramalan, which was a nail biter until the end. The girls scored a late try just before the hooter winning 28 – 26 in a very impressive game. Our last game saw us play Erindale who scored a few tries early on, we then came back to level the scores three tries a piece. Unfortunately, after a few quick breaks in play Erindale went on to win 22 – 14.

Th girls came third overall, missing out on the grand final by 1 point. Well done girls on a huge effort across the day playing in wet and cold conditions. You displayed great sportsmanship across they day and were a pleasure to take out. A big thank you also goes to Lucas Paton who helped coach the girls on the day. 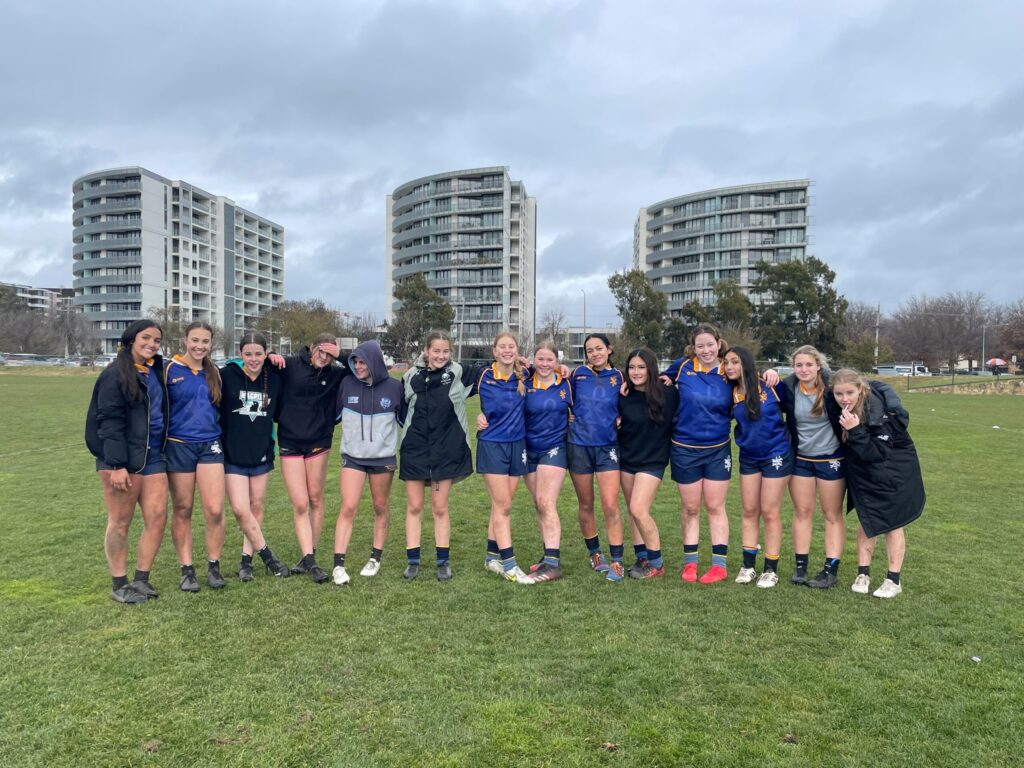 On Wednesday the 27 July the SFX Girls teams competed in the ACT Schools AFL finals. The girls played at the EPC Solar Park in Phillip

The 7 – 9 girls team changed so many times on the road to the finals. Unfortunately, the Year 7 girls were unable to play in the finals day as the date clashed with Year 7 camp. This allowed some of the year 8’s back into the line-up to play. The girls came up against a very strong and agile MacKillop side who dominated possession. Unfortunately, the results were not in our favour, and MacKillop came out on top. Our girls did a great job having no subs as well as covering large meters on the field. Well done to all who played you did us proud and kept your heads high.

ACT Champions! The 10 – 12 Girls AFL team had cracking start in the first quarter with multiple goals on the board. Lake G however didn’t let the game out their sights, lifting their efforts come the third quarter. At the end of the third there was only a goal and a few behinds difference making for a nail biting fourth quarter. The girls grouped together at three quarter time and lifted come the fourth, defeating Lake G 59 – 34! The girls had some outstanding goals and marks throughout the final, and it was a great match to watch. Congratulations to all students involved on an outstanding result. 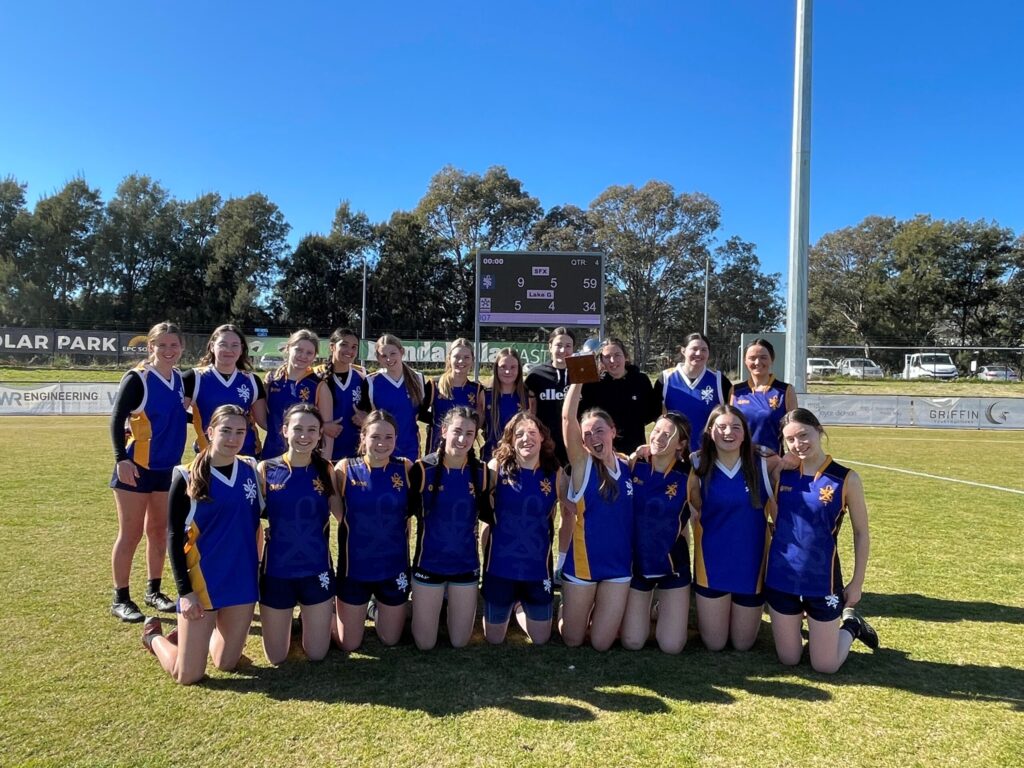 Back in May Will Hunt of 8I2 represented the ACT at the National Gymnastics Championships on the Gold Coast. Will competed in all apparatus which included the vault, floor, hi-bar, rings, pommel and parallel bars. During the competition Will landed his first double back off the high bars which was a tremendous achievement during competition. Congratulations Will on behalf of the SFX community on an outstanding effort at Nationals. 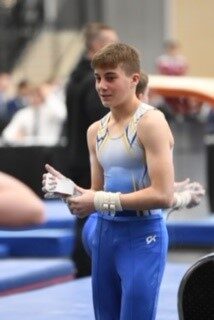 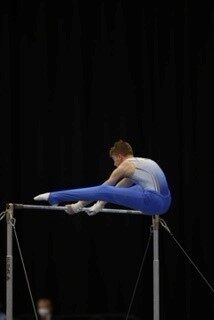 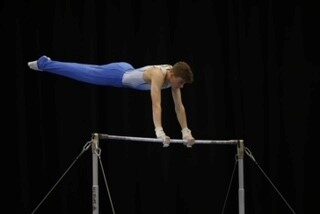 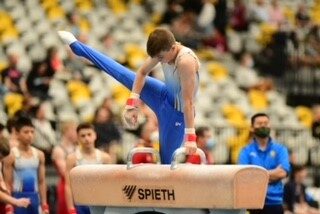 During the recent school holidays SFX have had various students represent the ACT Junior Brumbies teams in their respective age groups. These students competed in the Southern States Rugby Unions Championships held here in Canberra at RMC Duntroon.

Congratulations to Cooper McDermott of 7I2 for being selected in the ACT Under 13’s Brumbies Rugby Union Team. The Under 13’s team played up a division at the tournament playing in the Under 14 division as there were no other Under 13’s teams competing. Cooper and his side did extremely well playing against older teams, and did a great job holding their own. The boys came away with 2 wins and 3 losses. Congratulations Cooper on this big achievement. 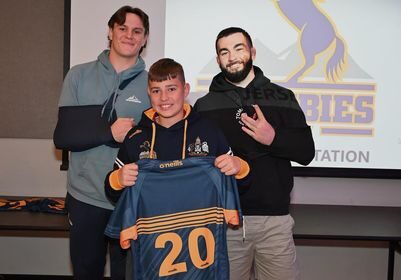 Congratulations to CJ Nobile of 10G2 and Sam Green of 9K1 who gained selection in the ACT Under 15’s Brumbies Rugby Union team. During the holidays the boys competed at the Southern States Rugby Unions Championships held at RMC Duntroon, in which their side competed in the U16’s division.

Sam helped vice-captain the team which is a great personal achievement demonstrating his emerging leadership as a player. The boys played against teams from the Northern Territory, Tasmania, Southern Inland and South Australia, coming away with 2 wins, 1 draw and a loss throughout the tournament. Congratulations boys on your efforts! 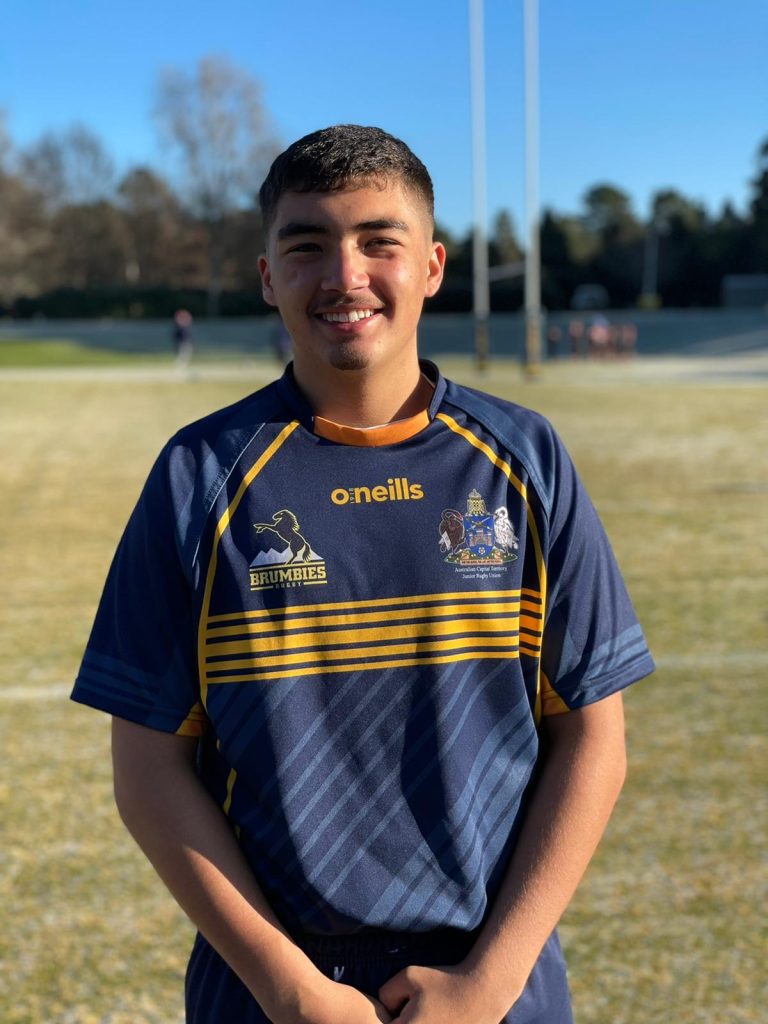 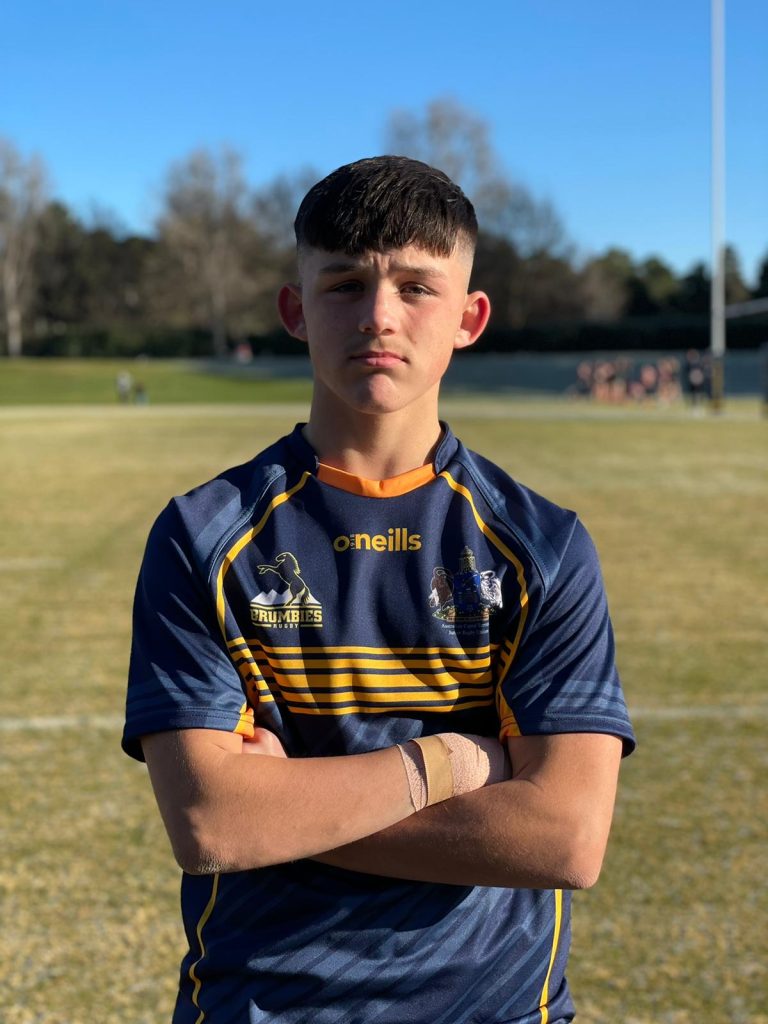 Congratulations to Mayah Amosa of 10I1 who gained selection and played in the Under 16’s Girls Brumbies Ruby Union Team. Mayah and her team had a great tournament coming away with 3 wins and just 1 loss. Well done on this great achievement Mayah! Congratulations to Genelson Kamanda of 7K1 who gained selection in the ACT Under 12’s team. This competition begun on the 30  July finishing up on the 6  August. So far Genelson and his team have played three coming up against VIC, NSW, and QLD. The team defeated Vic 38 – 8, went down to NSW 22- 0, as well as QLD 26-6. Good luck for the test of the tournament Genelson. Congratulations to Angus Durbidge of 9D1 and Cooper Braddon of 9D2 who gained selection and played in the Under 15’s team. The ACT side was in a tough pool coming up against Queensland, and NSW teams. Unfortunately, the ACT side was outmatched by their opponents defeated by NSW Combined Independent schools 46 – 14, defeated by QLD 32 – 6 and 60 – 0. Due to the physicality of the first three games the team sustained some injuries and unfortunately were unable to play their last game. Congratulations to both Angus and Cooper for your efforts at the championships, you have done both your team and your school proud. 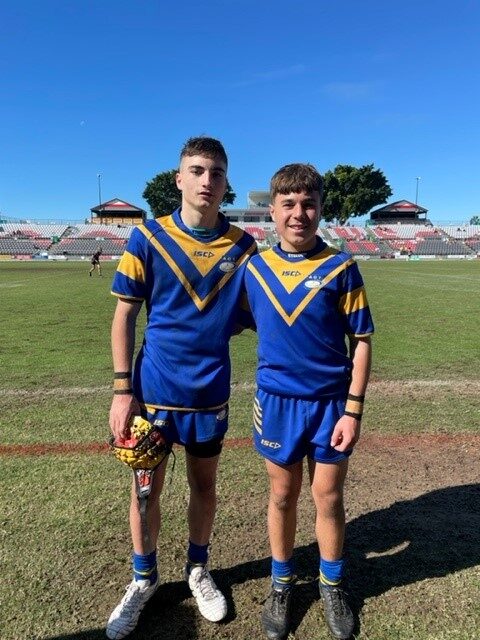 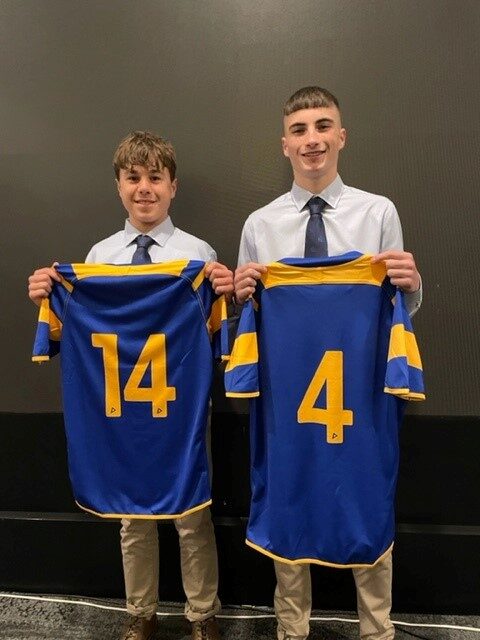 Congratulations to George Wood of 12I1 and David White of 12P1 who gained selection in the Under 18’s team. The Under 18’s side also came up against QLD and the Combined Affiliated States (CAS) side. The team had a touch match to start the championships going down to QLD 58 – 0. The boys bounced back defeating the CAS 24 – 4, and then again 52 – 14. Congratulations boys on your efforts throughout the championships. Congratulations to Damyn Smi  9I1 and Katie Brasnett of 10D2 who competed in the ACT State Fencing Championships on Saturday 16– Sunday 17  July at the Tuggeranong Archery Centre. Both students fenced really well and should be very proud of their efforts. Damyn placed 2nd place and was awarded a silver medal in the Novive Foil event, and Katie places equal 3rd and was awarded a bronze medal in the Novice Foil event. Congratulations to both Damyn and Katie! 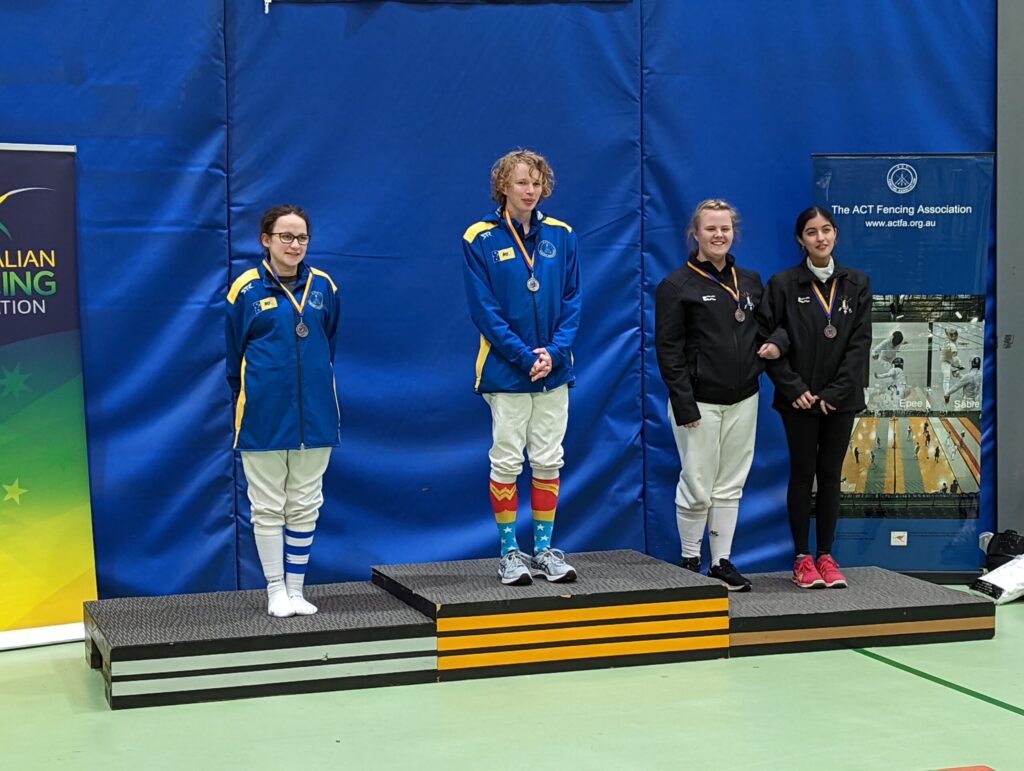 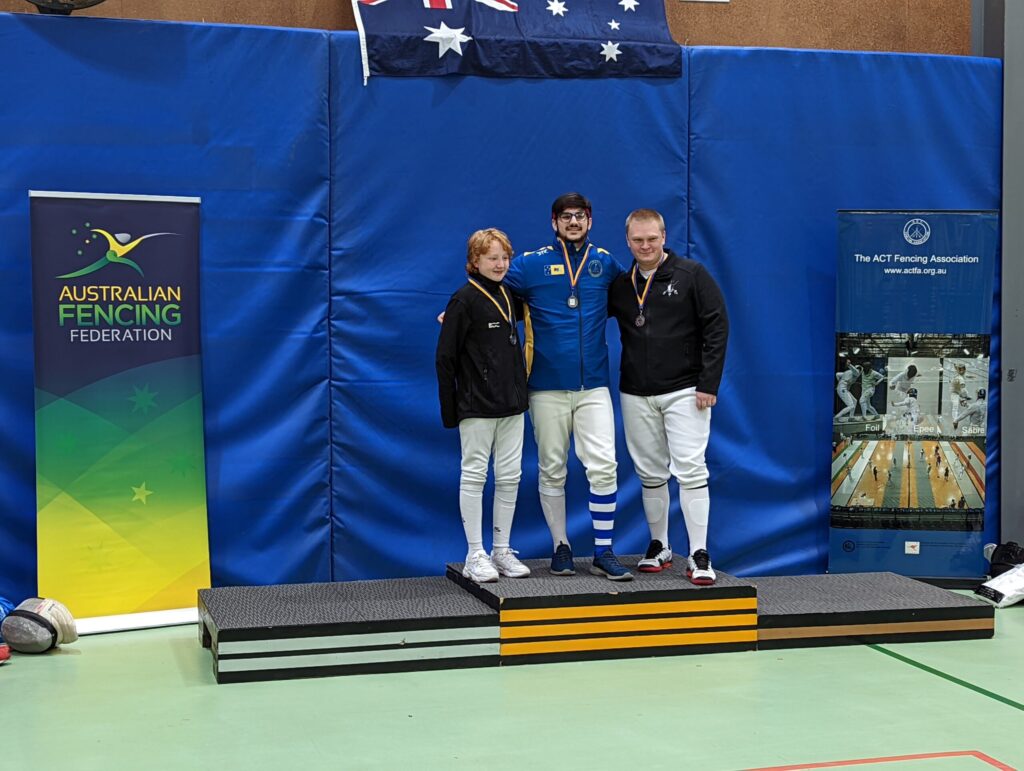 Congratulations to Haylee Scholes of 9D1, Kaiti Gough of 9G2 and Layla Raadts of 8K2 for gaining selection in the SSACT 15&U Australian Football State Team. The girls competed at the Australian Football Championships from 23–30  July in Albury, NSW. The girls came up against WA, SA, NSW, VIC and QLD, the top teams being QLD and VIC. Unfortunately, the girls didn’t win a game at the tournament, however they had a great time and enjoyed the experience. Congratulations girls you have done SFX proud. 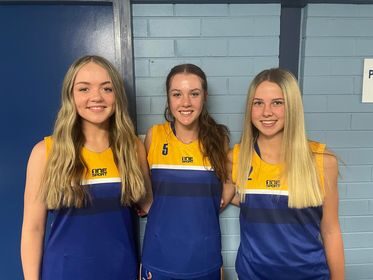 Congratulations to James Lum of 9K2 & Riley Hansen of 9G1 for gaining selection in the SSACT 15&U Boys Australian Football State Team. The boys also competed at the same tournament in Albury from the 23-30  July. The boys team came up against WA, SA, NSW, VIC, and QLD, the top 3 teams being SA, VIC, QLD. Unfortunately, the boys didn’t win a game across the tournament, however they were very excited when they got some points on the board. 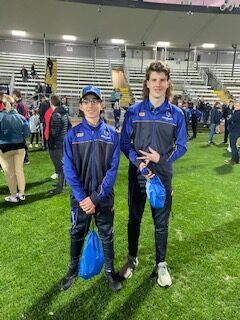 Congratulations to Ryan Korbl of 9G1 who has been selected in the ACT Under 15’s Touch Football team. Ryan will travel to Wagga Wagga later in the year in October to compete at the school sport national event. We wish Ryan the best of luck with his journey and preparation leading up to this event. Congratulations to Max Trushell of 12D1 for gaining selection in the ACT U/18 Invitational Schoolboys Football Team. Max and his team will be participating at the U/18’s Schoolboys Invitational Tournament, to be held from Wed 17 to Fri 19 Aug 2022, at Valentine Park, Sydney. The team will come up against teams from NSW, QLD and VIC. Congratulations Charlize Schiavello of 8P1 for gaining selection in the ACT Under 15’s Girls Volleyball team. Charlize will compete at the 2022 Australian Youth Volleyball Championships held from 24–28  September in Bendigo, Victoria. We wish Charlize the best of luck with her journey and preparation leading up to this event. Congratulations to Bryce Cover of 9D2 who has gained selection in the ACT Under 15’s Boys Volleyball team. Bryce will compete at the School Sport Championships in Queensland during week 6 this term. We wish Bryce the best of luck with his journey and preparation leading up to this event. Congratulations to Samsara Rauraa of 7I2 for gaining selection un the ACT Under 12’s Girls Netball team.  Samsara will compete at the Netball Australia National Championships from the 17–23 September at the Illawarra Sports Stadium, Berkely NSW. We wish Samsara the best of luck with her journey and preparation leading up to this event. ACT 18 and under Basketball

Max Manning in Year 9 has been selected in the ACT 18&U Basketball School Sports team to compete at the National Championship which is on 13-19 August in Bendigo, Victoria. This is a big achievement for Max as a 14 year old and something he has been working hard at. Congratulations and best of luck Max, we cannot wait to hear how you go!