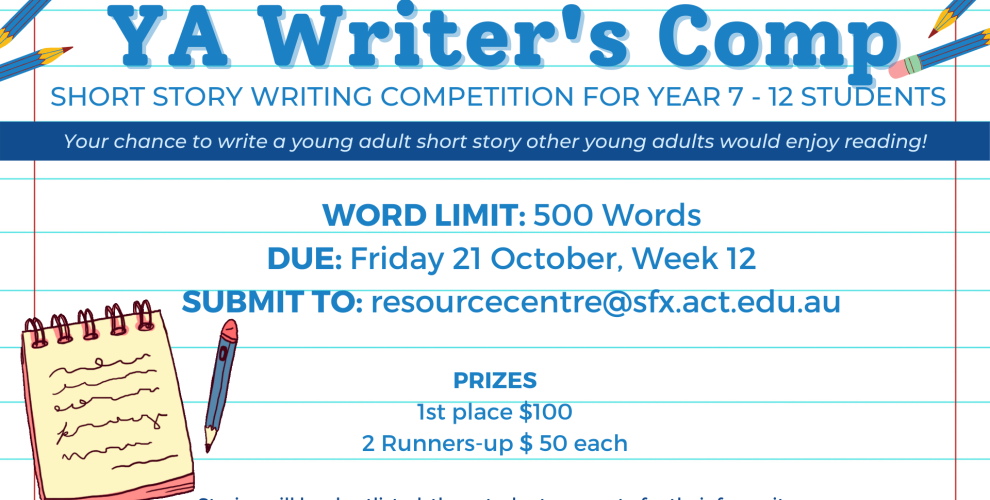 As we rapidly draw to the close of another term, staff in the Resource Centre encourage all students to visit the RC to gather some last minute holiday reads. We’d also like to remind you of the YA Writer’s Competition that closes on Friday 21 October.

For more information, please see the flyers and other advertising around the College.

Below is the winning YA short story for 2021, Whistle by Madeline now in Year 11. This might serve to entertain and inspire our budding authors.

Amongst the chaos he felt oddly calm. It was almost as if each moment melted away as they occurred. His hands on their neck. The icy pavement biting his knees. The metallic tang of blood on his lips. The numbness of silence as the screams and gasps faded. Before his brain could catch up, all the moments had melted, and the person beneath him had become a body. Oddly, once again, he didn’t feel the vastness of remorse, or the sting of shock. He felt quite neutral, the way one does after crossing a chore off their to-do list. He pondered this neutrality as he washed away the blood, disposed of the gloves, bagged the body, and drove towards the river. The wind picked up as he dragged the bag towards the river’s edge. He whistled a mindless tune as he pushed the bag into the stream and watched it float out of sight. It was kind of beautiful how the body disappeared into the darkness, one with the river and the trees and the stars. Once the temporary lapse of beauty blew away with the wind, he strolled back to his car, wondering what he should have for dinner.

The investigation began when the person’s family became more worried than usual. The person was a young man who had disappeared on more than one occasion, only to return a few weeks later with a lazy explanation. The man wondered why people cared so much about such a useless human, but then again, he felt strongly about the topic, considering he had killed him. So far, the investigation had led to multiple dead ends. No body, no weapon, no suspects. The man felt sure he would not get caught. He had an underlying feeling that followed him around, the lingering taste of a small victory. Once the endless cycle of suburban life had begun to bore him once more, the man decided to return home early. He unlocked the door, whistling a personal tune. He continued to whistle as he stepped inside and closed the door behind him. His movements slowed as he heard his whistle begin to echo, creating a distant harmony. He followed the sound, the echo growing as he neared the study. His wife sat inside, still in her uniform, her ‘Senior Constable’ badge pinned to her chest. Her laptop was open and playing a video. The image was dark and distorted, but the sound was clear. It sent chills down the man’s spine. Beneath the swish of wind, he could hear his own whistled tune. And the sound of a bag being dragged along the ground. It was security footage of him at the river. His wife looked at him with an expression of pure shock and betrayal. It was as if her world had caved in, crashing down until it was mere dust. It was the look of discovering the killer had quite literally been under your nose.