Fundraising for Drought Relief in NSW

On Friday 24th August we had a fundraiser for the drought-stricken farmers in our region.  We decided to support the charity ‘Buy a Bale’. Our aim was to raise $1,000 for the farmers, which would cover 10 large bales of hay.

With our goal being to raise as much money as possible, several staff and students hit the streets asking butchers, bakers and supermarkets if they could donate goods for the sausage sizzle.  To highlight the day, we also allowed students to dress as a farmer.

Mrs Gratton and the Year 11 SRC also ran a scavenger hunt and put together three amazing baskets that were raffled off. We also had 3 donations points around the College for students to access. We even had a bus driver find out about the day and he gave a student $20 to put into the donation box! 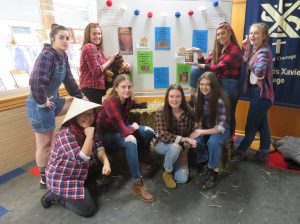 The Year 11 SRC and Mrs Carroll and Mr Potter started cooking early, and by the beginning of lunch we were ready for the onslaught of hungry students.

The queue for the line of sausages went down the whole length of the Year 10 Locker Bay and around to the Student Office.

Staff have never seen so many students queuing for sausages. The students were so patient and willing to wait, they felt that it was a great cause and wanted to do their bit to support the farmers. While they were waiting they were able to enjoy a ‘country music playlist’ that had been prepared by some of our students.

We had staff come from everywhere to help get all the students through and by the end of lunch, we had sold all the sausages. With the 3 donation boxes and all the sausages sold we managed to raise an amazing $2,500.  This will buy 25 large bales of hay for famers in our region. 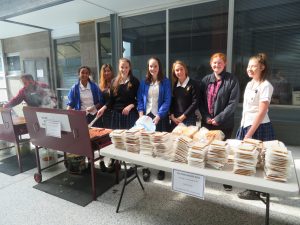 This amazing amount couldn’t have happened without the support from the following businesses:

There are also many staff that need to be thanked, Mrs Gratton and her wonderful Year 11 SRC, Mrs Carroll, Mr Potter, Mrs Wyche, the maintenance team, Mrs Barry and all the students who donated money, dressed up and who were willing participants in bringing about change to people in need.

We truly have a wonderful culture here at SFX! Thank you to everyone.