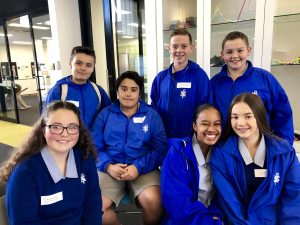 Late last term, seven Year 8 students were chosen from their cohort to represent the College at an initiative run in collaboration with ACT Health ‘It’s Your Move.’ The two groups of students were challenged to be entrepreneurs in their Humanities class where they had to develop a project that would increase the health and wellbeing of SFX students.

Group one consisted of Breanna Kelly, Izore Zaire, Will Debenham and Connor Sidlow. These students developed a project that they called ‘InForm’. Their idea consisted of buying pedometers and setting challenges for Year 7 and 8 students.

Group two consisted of Mia Simenec, Ashton Chaplin and Cohen Elliott. These students wanted to increase the health and wellbeing of Year 8 students by introducing ‘Friday Funday’ which they envisioned occurring every fortnight during period 5 in Humanities. During this lesson students would sign up and complete physical and brain stimulating activities.

The two groups of students had to present their idea at a forum in front of other schools, teachers, ACT Health workers and a panel of ‘Sharks’ including politicians and business leaders. Our students were confident, spoke exceptionally well and displayed exemplary behaviour. Their projects were very well received, and the students will continue working on the development of them this term to hopefully implement their ideas in the near future!

Every Day God: Seeing God in the Every Day – Our Jesuit Legacy
Comments are closed.