Journeying together in truth and courage 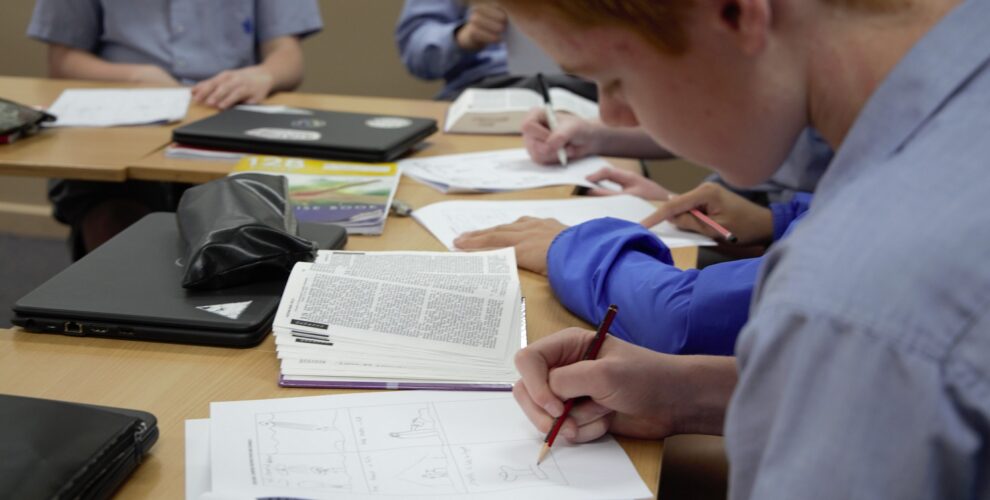 Our College theme this year is “Journey together in truth and courage”. This journey is one that calls for gumption to be honest about developing identity, strength and sacrifice.  In  2  Peter  1:5 we read the command to  “make every effort to add to your faith goodness;  and to goodness, knowledge”  calling all mankind to shun ignorance and complacency,  and to act in defiance of indifference, instead, commanding that we “be on […] guard; stand firm in the faith; be courageous; be strong.  Do everything in love” (1 Corinthians 16:13-14).

Courage calls us to become good. “In order for us to become good, we must do good acts. The reason for these actions is founded on love for others, as Christ loved us. Moral goodness is a result of habit and takes a lot of practice. We don’t become good overnight, just as diamonds don’t form instantly. Developing good habits requires patience, determination and focus. Becoming good is about becoming real, becoming the person we are intended to be. In the Velveteen Rabbit we are invited to contemplate what it means to become real.

“What is REAL?” asked the Rabbit one day, when they were lying side by side near the nursery fender, before Nana came to tidy the room. “Does it mean having things that buzz inside you and a stick-out handle?”

“Real isn’t how you are made,” said the Skin Horse. “It’s a thing that happens to you. When a child loves you for a long, long time, not just to play with, but REALLY loves you, then you become Real.”

“Does it hurt?” asked the Rabbit.

“Sometimes,” said the Skin Horse, for he was always truthful. “When you are Real you don’t mind being hurt.”

“Does it happen all at once, like being wound up,” he asked, “or bit by bit?”

“It doesn’t happen all at once,” said the Skin Horse. “You become. It takes a long time. That’s why it doesn’t happen often to people who break easily, or have sharp edges, or who have to be carefully kept. Generally, by the time you are Real, most of your hair has been loved off, and your eyes drop out and you get loose in the joints and very shabby. But these things don’t matter at all, because once you are Real you can’t be ugly, except to people who don’t understand.”

“The Boy’s Uncle made me Real,” he said. “That was a great many years ago; but once you are Real you can’t become unreal again. It lasts for always.”

The Rabbit sighed. He thought it would be a long time before this magic called Real happened to him. He longed to become Real, to know what it felt like; and yet the idea of growing shabby and losing his eyes and whiskers was rather sad. He wished that he could become it without these uncomfortable things happening to him.

To be courageous means to accept uncomfortable things happening to us; following God’s call to be who we are and do what we are called to do. To be courageous is finding our meaning and purpose in life and, by being faithful to that call, becoming holy; becoming our truest and best self. Father James Martin tells us that the concept of the true self is “the person we are before God, and the person we are meant to be” (Martin, SJ 2006, p.18). It can be confronting realising our true self, understanding that we are called to walk uncomfortable paths, have challenging conversations, take risks, face what might be the unpleasant consequences of our calling and our choices.

Understanding how we develop courage requires connecting deeply with God and looking to spiritual heroes for inspiration. We can see in such spiritual heroes that we can find God, and by extension, our true selves in the most amazing places. We can find God and ourselves, in the most glorious and in the most depraved and deprived places, in monasteries, in the desert, in prison and in concentration camps. Students in Years 9 to 12 at SFX have been studying such heroes recently.

Year 12 have been engaged in considering the life and work of German theologian, Dietrich Bonhoeffer. Bonhoeffer was a pastor and teacher, who eventually became part of the Nazi resistance and was hanged just before Victory in Europe day in 1945. He could have stayed safe and comfortable teaching in Harlem in New York but he felt compelled to obey God’s call to return to Nazi Germany and work to undermine the Nazi regime, at great sacrifice to himself, his family and his fiancé. He knew the consequences but he made the uncomfortable choice to be the person God intended him to be.

Bonhoeffer’s resistance to the Nazis began in 1933, when he pledged to fight Nazi injustice. He reminded his fellow German Christians in a sermon on 2 Corinthians 12:9 :Christians should give more offence, shock the world far more than they are doing now.  Christians should take a stronger stand in favour of the weak rather than considering first the possible right  of  the  strong,”. His words still echo in today’s world. Are we prepared to give offence for the sake of injustice and corruption or are our voices silent? Bonhoeffer reminded us that “silence in the face of evil is itself evil, not to speak is to speak. Not to act is to act”.

Year 11s have been reading the celebrated text “Man’s Search for Meaning” by Viktor Frankl. Frankl reminds us that those who have a ‘why’ to live, can bear with almost any ‘how’”. In the context of his concentration camp environment, a meaning to live, a purpose in life, would have been extremely difficult to find. Yet Frankl found meaning in three areas: love, purposeful work, and courage in the face of difficulty. He believed that “Everything can be taken from a man but one thing: the last of the human freedoms — to choose one’s attitude in any given set of circumstances, to choose one’s own way.” It requires facing the truth of our circumstances and the courage to live and die. Despite his bleak concentration camp environment, Frankl somehow found courage and the tenacity to set and strive towards becoming his true self. He Despite continual disappointments and extreme deprivation, he shows us how important it is for us to embrace everything we can and continue to believe that good will prosper through dark and difficult times.

Year 9 – Abraham and the covenant between God and his people

What would motivate someone to leave a secure place, a place filled with all of life’s comforts, a place where in your identity and reputation is established a place where you knew abundance? What would motivate someone to journey to a place of discomfort; to follow a new path and to accept a perplexing call from an unknown God? This is the experience we read of Abraham in the book of Genesis. Year 9s have been studying Abraham and the covenant between God and his people. Abraham, as some of my Year 9s decided, was the Jeff Bezos of his generation. Wealthy, industrious, from a family of idol makers, a very much sought after and prestigious profession in his times. He was the patriarch of an extended family who depended on him for the necessities of life. Yet, in a moment of encounter with the unnamed true God, he courageously accepts the invitation to leave his home and journey to a place which only God knows is his destination. Instead of being a stable city dweller, he begins, in his old age, a nomadic life, believing in the truth of God’s word and courageously accepting the challenges which he faced.

Real-life examples of moral courage such as Rosa Parks and Eddi Mabo demonstrate that you have to understand what moral courage means to you personally and constantly practise it as an individual. Seemingly small actions like refusing to stand on a crowded bus or continually sharing your beliefs and stories may have significant impacts.

This is my last contribution to SFX College Newsletters until February next year. I am taking long service leave for six months. My husband and I are planning to take a slow journey through small country towns in NSW, South Australia and Western Australia, before finally reaching Perth around the end of September. Originally, like so many others, we had planned a trip to Europe but when God closes a door, he opens a window and this is our window.  Mr Jarek Ferenc will be the Religion Curriculum Coordinator in my absence.

Finally, I leave you with a Franciscan blessing that you may grow more courageous, more holy, and belcome as God intended you to be

“May God bless you with discomfort at easy answers, half truths, and superficial relationships, so that you may live deep within your heart.

May God bless you with anger at injustice, oppression and exploitation of people, so that you may work for justice, freedom and peace.

May God bless you with tears to shed for those who suffer from pain, rejection, starvation, and war, so that you may reach out your hand to comfort them and turn their pain to joy.

And may God bless you with enough foolishness to believe that you can make a difference in this world, so that you can do what others claim cannot be done.