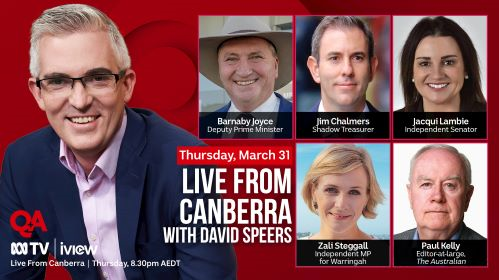 Last Thursday, 31 March, students from Years 10, 11 and 12 alongside Mr Carroll, Ms Horsington and Ms Missen, were invited to participate as a live TV audience on the ABC’s Q+A. We were able to experience a live debate between politicians and other representatives. The topic was the Australian Budget, released a day prior regarding all elements of our financial spending. In particular, Barnaby Joyce was featured heavily as the figure of main dispute, with rigorous rhetoric.

‘It was a great experience! To see politicians, form arguments on the fly with their vast knowledge about each party’s policies was so interesting.’

We had the rare experience to learn about government functions, local and macro-level fiscal policy and the inner workings of parliament. In particular, we received incredible insight from veteran commentator Paul Kelly from The Australian, demonstrating an articulate meta-approach.

We experienced for the first time what real television felt like from a live audience perspective—sitting in the back row is a lot more fun than just watching behind a screen. The audience was lively and interacted with the panel which developed a unique dynamic that could have only been captured that night! The most interesting aspect in our opinion was the fast-paced transitions between panel members in addressing drastically different and powerful questions about the next generation’s issues—particularly climate change, housing affordability and national debt. The level of professionalism despite political alignment was remarkable!

Many quality questions were submitted. Students particularly asked questions that related to our generation. One example was how the debt caused by this budget, amongst increased expenditures would fall to the weight of the future generations.

‘Given the ongoing Russo-Ukraine Crisis, should it continue past 6 months how will the government cope with regard to the 6-month fuel excise, making link to the fact that it directly correlates to fuel inflation?’

We received very insightful answers and were taken aback as to the depth and vast complexities in such a simple question.

Overall, participating as a live audience on ABC’s Q+A program was a great learning experience!