Peggy’s Dream to Change the World 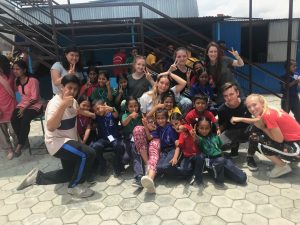 Peggy Barr is a Year 11 student at St Francis Xavier College who has been thinking of others as she plans her future.

She is hoping for a career in the army and decided that volunteering would be a good way of adding to her credentials.

In doing some research, Peggy decided that she wanted to try immersing herself in a different culture, and has recently been in Nepal with an organisation called Projects Abroad.

“As part of the trip, we did a “Care and Community” project, which involved working with kids at a school and teaching them different hygiene etc”, she said.

“We had the opportunity to teach them things like teeth brushing and we also painted their classrooms. I had to do some fundraising to go, so I did a GoFundMe campaign and was able to raise some of the money toward my trip”, she said.

“It was pretty lifechanging for me. We were in Kathmandu and Pokhara and it was crazy to see things like the traffic. There were scheduled power outages and just the culture in general was so different to our own”, she said.

“I am now a kind of ambassador for the program, and I would really encourage anyone who wants to do something like this to give it a go,” she said.

If you are interested in doing something similar to Peggy, the details of projects abroad are on their website.

Resilience Documentary to Screen at SFX

Our Community Spirit
Comments are closed.