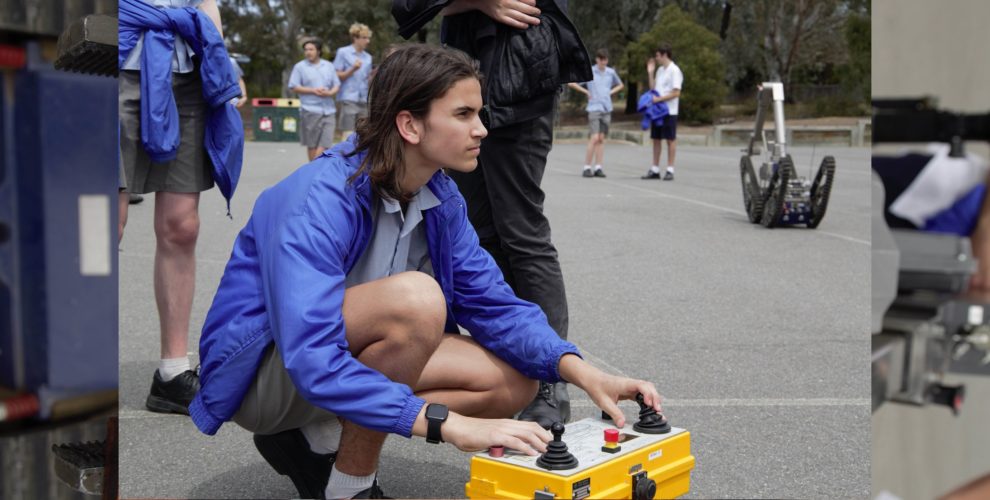 On Wednesday 16 October, robotics students got the amazing opportunity to work with members from the Australian Federal Police Bomb Response Team. The students involved in the afternoon form the Semi-Autonomous Rescue Team, or S.A.R.T., and compete internationally at a competition called RoboCup. Their specific competition, known as the Rapidly Manufactured Rescue Challenge, has the goal of developing cheap and easy to manufacture confined space rescue robots which can be deployed by first responders, so the opportunity to get hands on with AFP robots as well as showcase our robots to the AFP was perfect for the team.

AFP personnel brought out three of their bomb response robots, each of which had quite unique design features engineered to suit different applications they may come across, from manipulation of small objects, to remote communication and breaching buildings! S.A.R.T. students not only got a detailed discussion on the features and characteristics of each robot, but they were also given the chance to drive each robot around the blacktop. They were also given challenges by the AFP to complete, particularly focused on control and dexterity. Unsurprisingly, S.A.R.T.’s main operator Martin Hosking and youngest member Nathaniel Kneebone were both naturals with the AFP robots!

It was also a great opportunity for the team to showcase the robot and operating they have been developing over the past five years. AFP Officers were able to provide them feedback on controls and user interface, and were very impressed with how much our small robots pack into them for their price!

Special thanks to Matthew Hadfield from Qirx who got the ball rolling between the AFP and SFX for this event to happen, as well as SFX and S.A.R.T. Alumni Aaron Maggs, Connor Kneebone and Alex Cavalli for coming out on the day to share their knowledge of S.A.R.T. with the AFP.