The Real Miracle in the Feeding of the Five Thousand 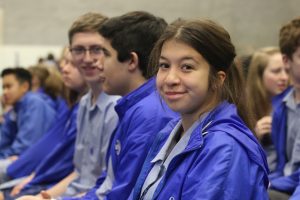 The Gospel readings from Sunday July 28, the 17th Sunday of Ordinary Time, and the next four weeks all focus on the key themes of Eucharist: thanksgiving, meal, sacrifice, Jesus present in his people, call to action and ministry because we are a Eucharistic People. These themes are familiar to every student from Year 9 onwards as we explore them in Religious Education every year in Semester 1. Ultimately these readings challenge us to care for ourselves, for our community, for our faith. Whatever we care for we will be prepared to work hard for and to achieve goals.  This theme was echoed in the address given by Alex Rodriguez at our recent College Awards Ceremony.  To live the Gospel message is to care. This simple but powerful message could revolutionise our society, if we lived it fully and faithfully,

In Jesus’ times, the faithful flocked to hear him. Imagine what it was like to be seated on lush grass on a mountainside by the sea of Galilee, with more than 5000 other people, listening to Jesus preach. You are more than likely an itinerant Jewish worker, who was paid daily. If you didn’t work, you didn’t eat. The ability to provide a daily meal was the central quest in your life. You may have been a member of the temple community of Jerusalem or a Pharisee, Sadducee, Scribe.  You certainly would have known your place in your community, who you could sit with, eat with, socialise with and who to avoid.  It would have been an extraordinary event for all these people to meet, greet and eat together. 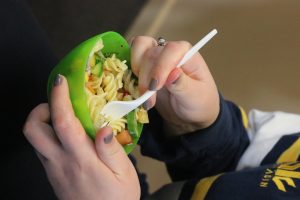 The purity laws of Jesus’ time, while originally designed to honour the God of who had brought them into the land of plenty, were restrictive and exclusive. People cared about honouring God through keeping these laws. They deliberately avoided people and places thought to be unclean and excluded them from social and religious gatherings. The religious authorities did not realise that the laws had become their God.  In the feeding of the 5000, Jesus challenged them and us to see beyond our scrupulous adherence to religious laws constructed by humans.

In our society, rather than dietary and purity laws, the great questions have become who is excluded by race, class, gender and/or culture.  Who are we prepared to live and eat with? How much are we prepared to be transformed by Jesus’ teaching and example? Are we prepared to live and work with members of the LGBTI community, the Muslim community, other ethnic communities who are quite often the victims of moral panics and fake news? Are we seriously prepared to give voice to the concerns and injustices experienced by minority groups? Or are we just prepared to sit on the lush grass and feel good about having a free lunch with Jesus? 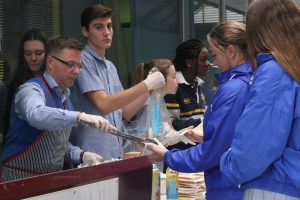 acle of the Feeding of the Five thousand, as Gil Bailie says, was not food; it was the breaking down of religious and social barriers that Jesus had been challenging in his preaching. It was hands-on learning. It was practice for living in the kingdom. Jesus opened their hearts, and they, in turn, opened their satchels, and the greatest miracle of all occurred. Jesus preached of a God of love and forgiveness and then invited those who heard his message to sit down together in the lush grass and live for a moment in the “kingdom” about which he was preaching. And for a moment these pious Jews were living the truth of the Gospel.

Gil Bailie goes on to say “Changing the human heart and liberating those trapped in slavish adherence to religious rules is a greater miracle than pulling loaves and dried fish out of a basket. The feeding of the multitude was a real miracle. The miracle was a new kind of community, one generated by prayer and inclusion, a “new generation.” it remains a model for a new community, one on which all can participate.

So often we complain about the need to do something about the exclusion faced by people vilified by race, class, gender and/or culture. As Sister Veronica Lawson says ‘We so often seek spectacular solutions to our problems. It may be that we too need to sit down together, on the lush grass and discover the wealth we have at our disposal to satisfy the hunger in our world.

That is what it means to be a Eucharistic people.

http://girardianlectionary.net/res/vu_loaves.htm Gil Bailie on the Miracle of Fish and Loaves, excerpted from Violence Unveiled: Humanity at the Crossroads, pages 212-215. New York: Crossroad, 1995.