A Question of Stoning

By Anne Armstrong, RE Curriculum Coordinator

Stoning has been in the news lately. In Brunei, a new law came into effect from April 3 which will punish homosexual sex and adultery with death by stoning.

Stoning is a communal punishment.  If everyone throws a stone, no one can be blamed if the victim dies. We can walk away without guilt, satisfied that we have upheld the law and protected our community from deviance. The terrible thing about stoning is that it still happens today. There are 15 countries, apart from Brunei, in which stoning is either practiced or authorized by law, even if it has never been practiced.

In Iran, Mauritania, Nigeria (in one-third of the country’s states), Pakistan, Qatar, Saudi Arabia, Somalia, Sudan, the United Arab Emirates, and Yemen, stoning is a legal punishment. However, out of these countries, only in Iran, Pakistan and Somalia have stonings occurred, and all instances in Pakistan have occurred outside the legal system.

Palm Sunday is often a day marked by protests against social injustice. This Sunday perhaps you could make a small effort to pray for those suffering from injustice, those in prison who are being threatened with stoning and those who suffer the stoning of ridicule and derision and oppression because of their beliefs, values and actions.

There are many Christians in the world today who are suffering not only ridicule and derision but outright hatred and physical violence. Pope Francis last month called for people to pray for Christians persecuted “because they speak the truth and proclaim Jesus Christ to this society”.  Countries such as North Korea, Nigeria, Algeria, Egypt and Myanmar are among the list of 50 countries where Christians are experiencing persecution.

People very often find truth confronting, just as the Jews in John’s Gospel reading about the woman caught in adultery who is brought to Jesus. Instead of discussing the situation with the woman, Jesus engages in dialogue with her accusers. After some discussion, nobody remains to stone the woman. Each person is challenged to consider their own human limitations. John’s gospel reveals that while God does not condone sin, neither does God condemn the sinner. 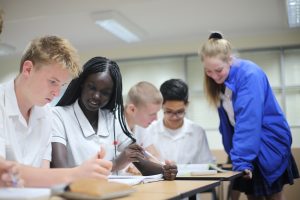 Fr Michael Fallon reminds us that sin is missing the mark. It is a behaviour that shows us to be less than our best and flourishing selves. We need to be in compassionate heart of Christ. As the Missionaries of the Sacred Heart say, we need to be on earth the beating heart of God. This beating heart is powered by our relationships with the Risen Lord – the Lord who heals and forgives us; the Lord who lifts us up from our brokenness and condemnation by others and restores us to wholeness, who allows us to be reconciled with our community. In this reconciliation we become the person we are called to be. We need to be the voice of the voiceless, the voice and companion of those threatened with stoning, real or metaphorical. We need to realise that when we point to others in anger or disgust, the rest of our own fingers are pointing back at us.

Sin is also about diminishing our own human dignity and the human dignity of others. Human dignity is a concept we have explored in Year 12 Encountering Ethical Issues this term, as well as in Year 11 Search for Meaning. Hopefully, our students will have formed a deeper understanding of their own human dignity and their responsibility to protect the human dignity of all those they encounter and read about. The capacity to understand and live by the principles of human dignity as people created in the image of God is one of great advantages of learning in a Catholic context. Our students are being prepared to live and contribute to a society through developing much desired soft skills such as communication, team work, creative and critical thinking, ethical decision making, problem-solving and conflict resolution which all contribute to making a more just and humane society.

Jesus did not so much love people once they changed, but he loved people so that they could change. He encouraged them to see their potential for flourishing and being the best self they could be. We need to be mindful of placing that vision of hope before others who are struggling, whose dignity is stifled, whose lives are diminished by self-doubt, anxiety and poor choices.

Understanding the importance of human dignity means that we cannot stand by and read about, or watch indignities being perpetrated on others without taking some action – the kind of action promoted by understanding our obligations of faith and our living out of the covenant with God. Year 9 and 10 RE students have been exploring such obligations in their units this term.  Supporting Palm Sunday rallies this Sunday are an example of such action.

Palm Sunday protests in Canberra this year focus on the rights of refugees and asylum seekers, people who seek freedom from persecution in their home countries. The Canberra Palm Sunday rally is on April 14 at 1pm in Garema Place. It is an ideal opportunity to be a voice for the voiceless, an opportunity to stand up to the would-be stoners of refugees and asylum seekers in our country. It is a chance to engage the oppressors in a dialogue about the truth of human dignity and human rights.

Palm Sunday protests in Canberra this year focus on the rights of refugees and asylum seekers, people who seek freedom from persecution in their home countries. The Canberra Palm Sunday rally is on April 14 at 1pm in Garema Place. It is an ideal opportunity to be a voice for the voiceless, an opportunity to stand up to the would-be stoners of refugees and asylum seekers in our country. It is a chance to engage the oppressors in a dialogue about the truth of human dignity and human rights.

I hope all students and staff enjoy a well-earned break, blessed by Good News of the resurrection of Jesus at Easter.