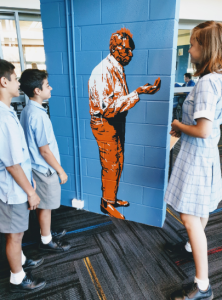 The Middle School breakout space has been blessed to have the work of resident artist Damien Veal grace its walls.

Year 8 Humanities students have spent some time this term learning about many key aspects of Australia’s history, including the events at Wave Hill, a Vestey-owned cattle station, which saw Vincent Lingiari, a Gurindji man, stage a ‘walk-off’, demanding better pay and rations.

Lingiari was an Aboriginal stockman and land rights leader. This strike lasted 9 years, the longest in Australia’s history.

‘In March 1973 the newly elected Whitlam government reached an agreement with Lord Vestey to lease 3236 square kilometres of Wave Hill station to the Gurindji people for ‘residential and cultural purposes and to de-pasture stock’.  On 16 August 1975 Gough Whitlam poured a handful of red soil into Lingiari’s hand to symbolise the legal transfer.  The Gurindji leader commented:  ‘Now we can all be mates’.  In 1986 the land was converted to freehold title,’ (Indigenous Australia, ANU.)

Many of us are familiar with the song, ‘From little things, big things grow’, by Paul Kelly. This song tells the story of Vincent Lingiari.

And now the students at SFX know and understand Vincent’s story too, and can be reminded of the courage and leadership he showed, as they pass by his portrait each day.