Excursion to Rome: City and Empire 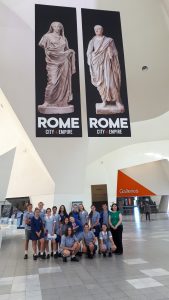 On Monday, November 12th, 2018, the students of Prof. Rodriguez’s Year 10 Italian class took a trip to the Rome City and Empire Exhibit at the National Museum of Australia.

It was amazing to learn how similar these people from 2000 years ago lived in comparison to us today. It was mind-blowing how these people could create such impressive things like statues and jewellery without any of the technology we use now.

Many of their systems were very much the same as ours, like their political systems and their economic systems. Although everything in the exhibit was from the ancient Roman empire, there was still clear differences between the cultures since the empire was so large.

We could see the different alphabets (Ancient Greek and Latin) and distinctive styles in pottery and architecture. The final thing that shocked us was the jewellery displayed there.

Everything was made of gold with other precious stones. There were earrings with pearls and amethyst, necklaces with garnet and emerald and a huge brooch made almost entirely of lapis lazuli. The Rome City and Empire exhibit was an exceptionally eye-opening experience never to be forgotten.

Notifying the School Regarding Student Absences
Comments are closed.