More of the Cast – GREASE

Meet more of the cast members from our upcoming production of GREASE – Danny and Rizzo!

Join us in the Theatre at St Francis Xavier College (SFX) on Thursday 22 August to Saturday 31 August 2019 to see our talented students recreate this classic! Tickets are selling fast, so don’t miss out. 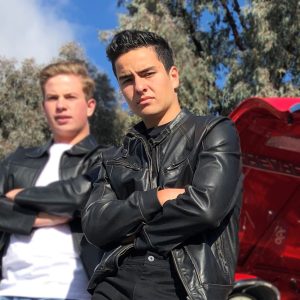 Ruben Amosa is 16 years old and is our leader of the T-Birds, Danny Zuko. Ruben is in Year 11 and only joined SFX last year, but we are certainly glad to have him as one of our talented performing artists.

Sixteen. I watched the movie GREASE the night before and the day of the auditions.

Why are you excited to be part of GREASE The Musical?

I’m most excited to sing ‘Sandy’ because it was my favourite song from both the movie and the musical. This will also be my last chance to do a school musical. I was in a musical at my primary school playing Aladdin and I had fun doing that so I just wanted to have another go, but perhaps with a bit more maturity this time. This production will help me, if I decide to do musicals after school.

I didn’t hear much information about auditions, I had just finished Year 10 and had just undergone shoulder surgery. I was in the car with my dad and Mr Child (a previous music teacher at SFX) called my dad asking if I could audition the next day. So I got emailed the information I needed to audition then went home to start practicing and to watch the movie.

My dad, Steve and sister, Kirrah who are both performers. They have been in musicals, my dad was in Wicked as The Wizard and my sister was Elphaba. Kirrah was also in The Bodyguard playing Whitney Houston’s sister Niki Marron and she was also the understudy for Whitney Houston’s character Rachel Marron. 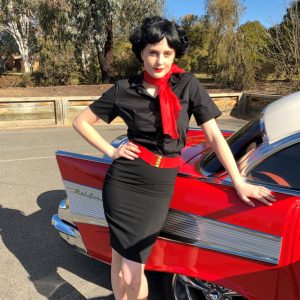 Claire Hackett has been at SFX since she was in Year 7 and has been involved in the performing arts department and various productions for a number of years. This is Claire’s last year at SFX as she is 17 years old and in Year 12, but we are so pleased to have her as our spunky Rizzo.

I was pretty young, I must’ve been around 10 years of age.

I’m excited because it’s a show that encompasses so many elements of the 1950s, it’s also a fun and energizing show.

I am involved with a lot of performing arts at SFX, and after being a part of Hairspray I was so excited to be a part of this year’s musical.

I am constantly inspired by Brendon Urie, as he has so much personality and charisma whenever he performs, whether it be on stage or Broadway. He is also super versatile with his music and isn’t afraid to branch out into different directions.

Book Week 2019 – Reading is my Secret Power
Comments are closed.