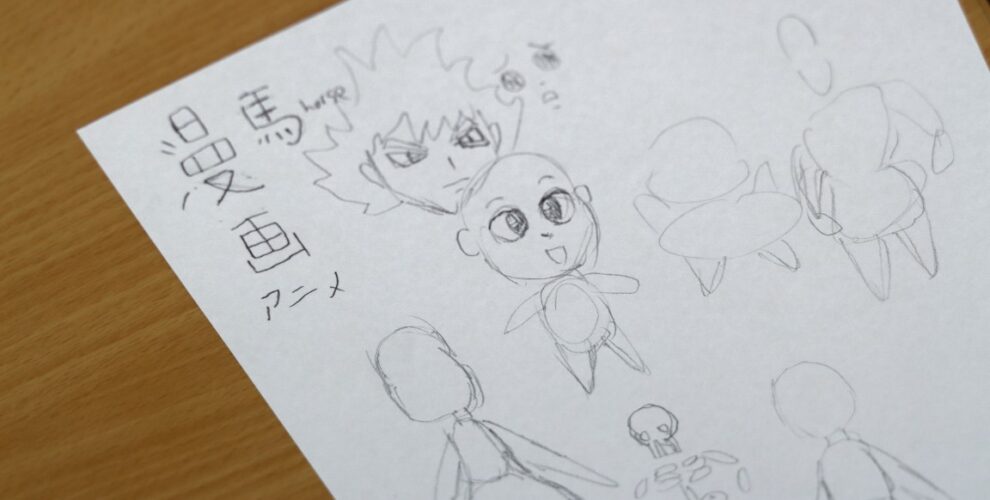 As a feature of our Year 8 Japanese program, students participated in an exciting Manga Japanese comic workshop on 29 August with Victorian-based, published, freelance Manga artist, Kenny Chan. Our students enjoyed Kenny Chan’s very immersive artistic workshop and his entertaining visual demonstrations of what changing visual features can do to imbue characters with personality and emotion. We learnt that a long nose could add age to a character, that the eyes are where humans focus most, which means that manga characters usually feature large, expressive eyes, but have less detail for other facial features. We learnt that a smaller head could create bulk in a character’s appearance and that a louder or quieter character would have a larger or smaller mouth respectively. We learnt to reverse capital C and J together and in reverse to create instant ears on a character and that drawing is as simple as potato and carrot shapes!

Students put their understanding of hiragana and Japanese kanji to work in their first art piece—a face made purely out of Japanese characters! Students were encouraged to try different features of manga and these easy to master foundational skills made for some very impressive manga drawings.

At lunch, there was also a special focus session for interested students from Years 7-12 who were keen to join the fun. Year 8 students will be putting these skills to use in their portfolio assessment this semester. They will add visual representations of their characters to complement their growing ability in Japanese written characters of hiragana, katakana and kanji.

Thank you to our amazing Year 8 Japanese teachers  for making this exciting workshop possible for our students to learn more about this interesting Japanese art form.

‘It was really fun to learn new techniques on how to draw cool characters and facial aspects. Kenny Chan taught us that most Japanese characters have meaning behind them.’ Sylvia, Yr 8

‘It was a great experience that definitely helped my art.’ Owen, Yr 12

‘The teacher was lovely, I had lots of fun and learnt so much!’ Olive Yr 7

Learning Commons presentation series a success for 2022
Comments are closed.