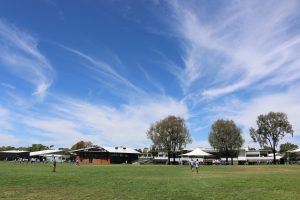 Tamika Stephens has been selected to represent the ACT for the U12s Netball School Sports Team.  She is attending the National Championship in Darwin during week 9. We wish Tamika all the best!

On Thursday August 30, the 9/10 Girls Soccer Team travelled to Lyneham for the Northside Competition. The day started out with a chilly -5 and terrible traffic delaying many of the players, starting our first game with only 8 on the pitch. Thankfully in the first five minutes our last players arrived, and we had a full strength side to finish our first game against Harrison School with a 1-0 victory. In our second game we faced Campbell High School in a difficult matchup which we led for most of the game until Campbell snatched a late equaliser, finishing a draw. In our final match we came up against UC High School Kaleen, also finishing with a 1-0 win. After the group stages we ended up equal top of the pool table with Campbell, meaning the top spot would be decided in a golden shootout. Our first shot by Claire Orton sailed beautifully into the back of the net, though unfortunately so did their first shot. Our second shot from Bronte Harris also sailed in beautifully, and in an incredible show of ability our keeper Amy Briggs was able to rise to the occasion and save Campbell’s second shot, putting us on top of the table. The team was absolutely ecstatic, running to the Amy from half way and surrounding her in a massive cheering mob! This win put us up against Harrison School for the second time, and they were looking in great form for the quarter final matchup. The first half was hard fought by our girls, seeing us going down 2-0 by half-time, but they never but their heads down and made an incredible push in the second half to bag a quick goal, putting us just one behind with plenty of time left. We kept the pressure on and looked sure to score, but unfortunately the match was called short due to time constraints on the day, meaning the girls were knocked out of the competition, but the girls kept their spirits high after a fantastic day of football.

The team all played incredibly well, but particular praise has to go to Amy Briggs in goal who was stellar all day, as well as Annabel Whalan who led the team well from the front. Huge congratulations to the coaches Alannah Daly and Darcy Tait who showed incredible leadership all day.

The girls played with great spirit all day, they had to come from behind in the first two games, and came away with a draw, the third was a tough contest with both sides having chances, results went our way and we made the Semi Final. In the Semi, we had a tough offside call go against us that would have put us in front. In the end though it was not to be and Trinity sent a shot searing past Charlotte (the keeper). Abbie Bailey and Noumi Musa were two outstanding players on the day and supported well by Samantha Bailey and Jada Lamond. The girls were tremendous all day and Thank you to Shannan and Angelina who helped coach the girls. Thank you to the parents/grandparents that came to assist as well, could not have done it without them.

Despite a slow start in game 1, the girls showed great composure and determination to come back and make it a close game. Game 2 against Lake G was a tough one against quality opposition. The girls played the game with great spirit and had a lot of fun. In the final game against the team gave their opposition too much space and St Clare’s ran away with the win. Well done to all the girls!

The Northside Athletics carnival was held on Thursday 13th September at the AIS. The weather was brilliant and there were many fantastic results. In the overall combined results SFX came 4th, missing out on a podium position by 5 points! We had 31 students qualify for the ACT Athletics carnival on the 25th September. There were also some Northside records broken, which is an outstanding achievement. Abbie Bailey broke the 14yrs Girls 100 & 200m records with times of 12.62 & 25.89s. Alannah Daly broke three records in the Triple Jump (7.26m), High Jump (1.25m) and Javelin (19.94m) events. Well done to Abbie and Alannah, as well as all other participants for the excellent results!

Congratulations to Hannah Manning who competed in the Sydney All Schools Track and Field Championships on the 27th September. Hannah received a gold medal after finishing first in the under 16 5000m race walk. Well done, Hannah!

Congratulations to all SFX students who competed at the Oztag Nationals in Coffs Harbour last weekend.

The girls got off to  a slow start but once they found their grove the wickets kept on coming and the runs flowing! They were unstoppable! A great day was had by all and it was great to see team work and sportsmanship. Well done, girls and thank you for a great day.